The Border Meuse is a 42 km section of the River Meuse/Maas that flows along the border between Belgium and the Netherlands.   During the 1980s, more and more social resistance was being felt against gravel extraction, with past extraction sites resulting in vast areas of open water, adding little value in spatial quality. In the early 1990s, in response to the increasing resistance from local communities, the idea came for an alternative way of approaching gravel extraction, namely shallow extraction in combination with river restoration and nature conservation – the ‘green for gravel’ initiative. This gave rise to the Grensmaas / Border Meuse project.

During 1993 and 1995 there were two extreme floods in the Grensmaas / Border Meuse, the first with a water flow at a rate of 2950m3/s, and although the second was less extreme, flooding lasted longer. These catastrophic events led to the local government initiating an advisory committee that added a flood-protection objective to the already existing Border Meuse project:

Objective 2 – Nature conservation: creating room for the river and a basis for habitat creation – at least 1,000ha by 2018.

The Border Meuse is currently in an engineered state, with past gravel dredging in the main channel of the river resulting in a deepening of the watercourse (see Figure 1). In addition, over time, the floodplains have been raised due to the accumulation of silt during high water periods.

The design of the Border Meuse project acts to widen the river bed and lower the floodplains. The clay layer which currently sits above the gravel will be removed and stored within deeper pits (created through the removal of gravel) at a greater distance from the river channel to act as a flood barrier to the neighbouring towns (see Figures 2-4).

To further minimse flood risk, the design also incorporates two side channels around a village, and where it is predicted that the river widening is not sufficient to meet flood levels (1/250 years), additional heightening of the dykes will be undertaken.

The Border Meuse project design is estimated to yield approximately over 35 million tonnes of gravel. The scheme has been designed to be a zero budget project, with the benefits of the gravel paying for the entire execution of the project, including, for example, the land purchase, replacing pipelines and additional works. 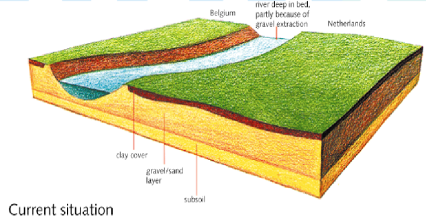 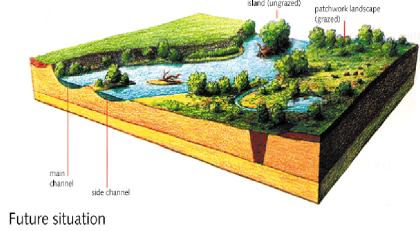 At the beginning of the project there was strong opposition from the local community and politicians against more gravel extraction in the local area, given the existing legacy of deep waterbodies. While there was a common agreement that flood mitigation was a necessity, there was concern over further gravel extraction; the change from an agricultural landscape into a nature-conservation end-use and the fear of noise, dust and damage during extraction.

Through the project planning stage, this opposition was overcome by discussing developing plans with local authorities and local representatives from the community. Information and open discussion with the public was very extensive. Worries were allayed by assurances that gravel had to be extracted to store the clay and loam to lower the floodplain; an understanding that the landscape would change but that new opportunities would arise; that the loss of farming would be fully compensated and that the duration of works would be set to a fixed number of years for each of the 11 extraction locations. This dialogue with inhabitants, public and local representatives has continued during the project execution, resulting in stakeholders who are now being able to see and experience the results, becoming very enthusiastic about the project.

Lessons learned from this project

The lessons learned are nowadays being used within other riverprojects of Rijkswaterstaat.

The project implementation has now been running seven years and already positive results can be seen. The flood protection has increased significantly, with the River Meuse having been broadened up to ten times its original width, in some locations. Under high water situations, the river water level has been recorded to be up to 1m lower than before works began.

Following the gravel extraction, the restoration to a nature conservation end-use is already happening, with lower nutrient soils and the use of natural regeneration resulting in an interesting array of early pioneer floral species and associated fauna. The re-profiling of the floodplain and the varying river flow velocities will enable the river more flexibility resulting in a natural disturbance regime with the river constantly re-shaping, undercutting banks and moving sediment around. The restored areas are being carefully managed to ensure the maximum long-term benefits for biodiversity through a grazing regime, using both cattle and horses.

Public access and recreational opportunities has grown through the implementation of the Border Meuse project, giving an added benefit to local businesses. Nature conservation organisations organise guided trips along the river introducing local people to the habitats that are developing and to the species that are moving in to exploit food and shelter resources.

With thanks to Eric Smulders, Project Manager, Dutch Ministry of Infrastructure and Environment, Rijkswaterstaat.