Creation of area of floodplain forest

The Floodplain Forest Nature Reserve (formerly known as Manor Farm) is a 50 hectare wetland nature reserve beside the River Great Ouse at Old Wolverton, Milton Keynes. Created through the extraction of gravel, the site’s restoration scheme was carefully designed to enable the development of a habitat resembling the pre-historic condition of the floodplain. The project was led by The Parks Trust, - which owns the site and manages the nature reserve - and Hanson UK which undertook the quarrying operation and landform restorations.

The Parks Trust is an independent charity that cares for over 5,000 acres of green space in Milton Keynes, including the  Floodplain Forest Nature Reserve, which lies within the city’s Ouse Valley Linear Park.  Set up in 1992, the Trust’s primary aim is to maintain the green space to an exemplary standard and  to deliver environmental education and provide exciting leisure and recreation facilities and events . The Trust is also committed to conserving and enhancing biodiversity on its

The Trust selected Hanson UK as its partner to deliver the scheme. Quarrying operations commenced in 2007 and continued until 2014, the operations being carried out in several phases working around frequent inundations of water from the river. Final landform restorations were completed by Hanson, at which point the site was returned to The Parks Trust to continue the habitat restoration and management works and to install footpaths, boardwalks and bird hides to facilitate public access. The site was officially opened to the public as a nature reserve in August 2016.

In the mid-1990s the Parks Trust commissioned a feasibility study into the idea of creating an area of floodplain forest at Manor Farm through gravel extraction. The study identified the changes required to the floodplain’s topography in order to achieve the target habitat and confirmed the project’s viability.  It was considered that by removing the minerals deposits, using the overburden materials to create new landforms and creating new connections between the main river, two existing back channels and the floodplain, a habitat would be created resembling a natural braided river.

After the Trust selected Hanson as its project partner in 2001, the two organisations worked together to develop the detail of the scheme. Hanson, as minerals operator under the agreement, was responsible for developing the proposed quarrying scheme, preparing the planning application and obtaining other statutory consents, including consent from the Environment Agency for works in the river floodplain.

The Trust and Hanson undertook extensive consultation on the project. The proposal was locally controversial given the site’s long-established pastoral character and status as a Linear Park, which some local people felt incompatible with a quarrying operation. However, the Parks Trust and Hanson developed a strong case for the project, including highlighting the local and national biodiversity action plan targets the project would deliver, which obtained the backing of a range of statutory and non-statutory environmental and conservation organisations including the RSPB, Natural England and the Forestry Commission. The case for the project was also supported by the fact that the site would deliver most of the 800,000 tonnes of sand and gravel identified as needed under the Local Minerals Plan at the time.

Planning permission was granted in 2004 specifically for development of a floodplain forest through mineral extraction. It is believed to be the first planning consent of that kind in the UK.

The quarrying operation was conducted on a relatively  small scale, generally using only one or two 360o excavators and dump trucks at a time to extract the minerals and cart them to the on-site road-accessible processing area. Overburden materials were placed in stockpiles carefully positioned to screen the workings from surrounding footpaths as much as possible whilst also ensuring they did not impede the flows of water when the flooding from the river occurred, which was frequent during the operations.

The landform restoration was progressive over the life of the extraction. After each phase of extraction, the overburden materials were placed to create a complex of channels and low-lying islands and bars running broadly parallel to the main river, which lies just outside the northern boundary of the site. Two existing river back channels, one along the southern edge of the site and one that cuts diagonally across the site, were retained in their original form. As well as the new channels and islands, the re-formed landscape includes a number of isolated pools and ponds designed to fill through ground water or occasional inundation rather than subject to flows of water.

The replaced overburden materials of top and sub-soils were either kept separate or mixed to create varied ground conditions, including zones of lower-nutrient soil and some areas of bare gravels to provide different habitats. Richer top soils were placed to form some relatively higher areas of ground intended for woodland cover. An extraction area at the west end of the site, which is low lying but unconnected to the main river and back channels, was formed into an area of floodplain meadow.  This was returned almost back to its original ground level, which enabled the placement of much overburden material whilst allowing the main area of the site to be formed into lower-lying channels, islands and bars.

The final stage in the landform restoration was to excavate the interconnecting channels between the main river and pre-existing back channels and the new channels created within the site. The invert levels these connecting channels were excavated to were determined by measuring seasonal water levels in the main river beside the site and assessing Environment Agency records of river water levels from a nearby gauging station. The new channels were excavated so that they begin to flow as the river rises seasonally or following bouts of heavy rain. The fluvial flows from the river combined with the seasonally-fluctuating ground water levels means that water levels in the site are uncontrolled and dynamic.  Water flows through some or all of the newly-formed channels according to natural levels of precipitation. No control structures or hard-engineered erosion prevention measures were installed. The only measure to prevent excess erosion within the channels was placing over-sized gravel ‘rejects’ to deflect some of the flow energy and to allow the development of vegetation and the build-up of woody debris, such as tree branch material.

The Parks Trust undertook some initial planting of trees, shrubs and reeds to establish the new habitats although much of the habitat creation is intended to be through natural regeneration.  The planting that took place included a range of native species of trees and shrubs, including black poplar, using locally-sourced stock of this relatively rare tree. Habitat restoration techniques, including green hay strewing (hay obtained from nearby species-rich donor sites) to enhance the floodplain meadow, will be employed. On-going management of the habitat will be low-key, including retaining dead and fallen wood and allowing the build-up of woody debris in the water channels. The introduction of grazing livestock on an extensive basis in low numbers is proposed, principally Konik ponies and occasionally cattle.

The quarrying operations revealed considerable archaeological finds, including remnant paleochannels containing the remains of red deer and aurochs (wild cattle), all of which indicate the natural pre-historic floodplain forest that existed at the site. Relics of Palaeolithic, Mesolithic and Neolithic human activity were also found, including worked flints, pottery and systems of parallel ditches. 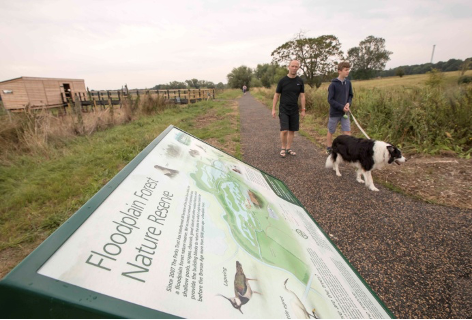 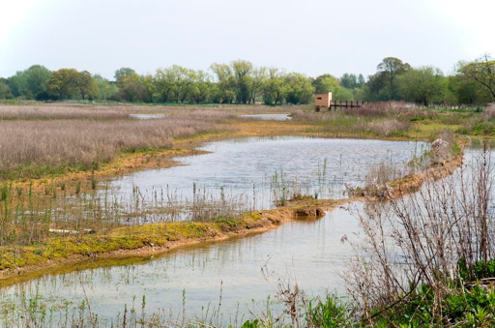 Costs of restoration and management

The royalty payments received by The Parks Trust from the sale of the minerals from the site are ring-fenced to cover the costs of establishing the habitat, installing the visitor access infrastructure and the future management of the site as a nature reserve. This corresponds with the Trust’s charitable status, which is self financing using the income from invested endowment funds to cover the costs of its operations.

Upon completion of the main phases of restoration work, the site was opened up as the Floodplain Forest Nature Reserve in August 2016.  The Reserve is freely open to the public with new leisure routes, boardwalks, bird hides and site interpretation. Manor Farm is now a major amenity asset and wildlife attraction in the Ouse Valley Linear Park as is readily accessible by the local population. It provides a valuable green space for huge numbers of people on the northern border of Milton Keynes, a major urban growth area, linking in to the surrounding green areas of wider Milton Keynes and the neighbouring countryside.

A further public benefit is the increased capacity and more natural functioning of the river floodplain, helping to reduce the risk of flooding to downstream urban areas.